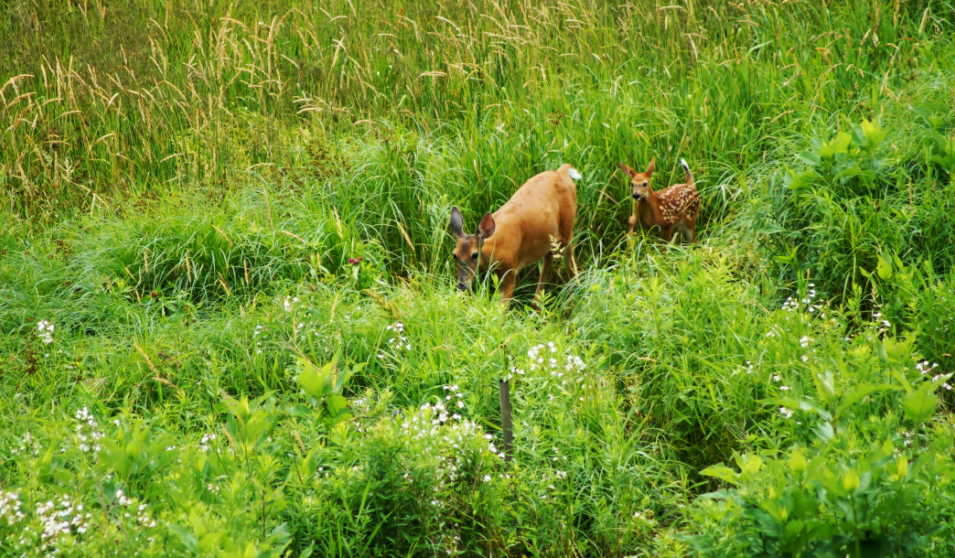 Dale Dahlke, a retired biology teacher in Dunn County, owns a large plot of land on the south fork of Wilson Creek. His knowledge of biology is obvious as he talks about the aquatic ecosystem on his property, and he’s well aware of the water quality issues it faces.

Wilson Creek has been on the EPA’s federal impaired water list since 2012, and another small stretch was added in 2016. These areas are listed for excess phosphorus, but near Dahlke’s property, the stream bank was seriously eroded and laden with sediment.

As a board member of his local Trout Unlimited chapter, Dahlke worked on several stream restorations. He knew his land could benefit from such a project, but it would be expensive, and he needed some help to make it happen.

This boosted the level of animal life and diversity in the stream, said Dahlke. Without the generosity and collaboration of so many groups, the stream on his land might still be muddy and desert. Now, it’s teeming with life.

"The insect life is profuse and diverse; diversity is the name of the game in an environmental community,” said Dahlke. “The trout are incredible. They no longer have to stock fish in the stream, and people are constantly fishing out there.”

This diversity now extends beyond the stream as well. Dahlke used the money from the easement to complete a 20-acre prairie restoration on both sides of the stream. The prairie keeps invasive plant species at bay, and a lot of wildlife has returned as a result, he said.

The DNR holds multiple fishing easements along Wilson Creek, but most have not yet been completed. The Dunn County Land and Water Conservation Division (LWCD) and DNR hope that the restoration on Dahlke’s property will serve as an example, and that neighbors up and downstream will take notice.

In an effort to get residents involved, Dunn County LWCD partnered with NRCS to create the Wilson and Annis Creek Watershed Partnership (WACWP). The group holds quarterly meetings where residents take the lead in promoting land stewardship and prioritizing best management practices for water quality improvement.

The group’s ultimate goal is to remove Wilson Creek from the impaired waters list, but they know this won’t happen right away. For now, they help identify priority practices, rank projects and communicate the benefits of their work to other landowners, according to Lindsay Olson, Dunn County LWCD Water Quality Specialist.

“People don’t want to be told what to do, they want to be part of the decision-making process. It’s really important to have citizen involvement and guidance,” said Olson. “I think it makes the whole project more successful because they’re excited about it, they’re part of the solution, and they’re also more willing to share the project with their neighbors and friends, and hopefully garner more interest that way too.”

WACWP was started just over a year ago, and the group has yet to install “hard practices” but planted some cover crops last fall. After the snow melts, they’ll start putting in grass waterways, stream crossings for livestock, fencing, roof runoff structures and critical area plantings.

These projects will be paid for with NWQI funding, which is allotted specifically for installing conservation practices that will benefit water quality in impaired water bodies.

The NWQI fund provides $300,000 each year for three years, with a possible extension to five years. They fund projects that rank highest first, but almost every project is getting funded thanks to this large pot of money, said Olson.

Going forward, Dunn County LWCD will work with the DNR to monitor changes in water quality. The DNR set up additional sampling sites on the stream, and the county is tracking the amount of conservation practices implemented and running models to estimate phosphorus reduction.

Dahlke said he hopes that the state of Wisconsin, through the DNR, is able to continue providing funds so that more landowners can get involved.

“These projects are expensive. If I hadn't gotten the easement cost, I wouldn't have been able to do my prairie. Without the trout stamp money, the DNR wouldn’t have been able to do the stream restoration,” said Dahlke. “We can’t expect landowners to take on that burden. If we want them to prevent the phosphates going in, we have to lend that financial hand.”