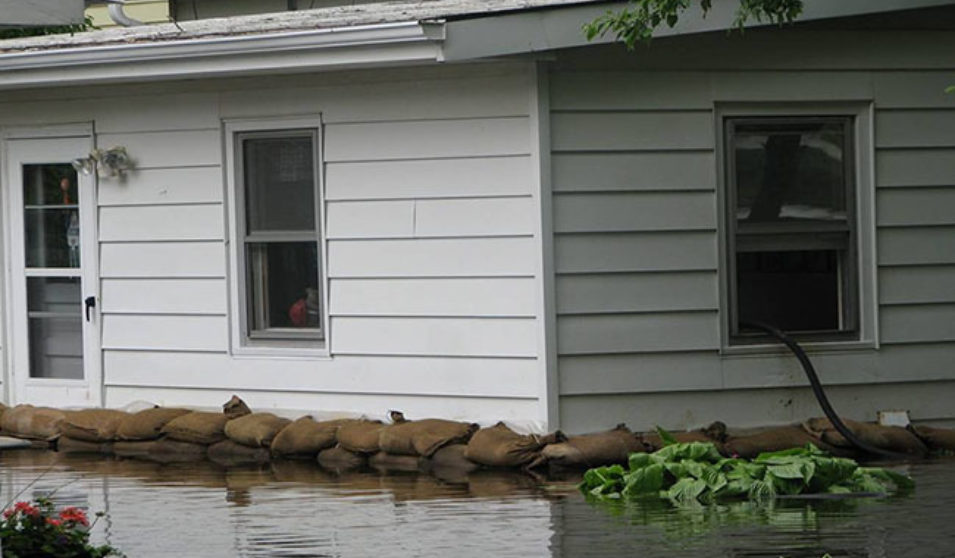 Where there are almost 400,000 people and new development converts five square miles of land each year, the county land and water conservation program is bound to be a bit different than the rest of the state. Such is the case in Waukesha County, where construction site erosion and stormwater management are their top priorities. It has been that way ever since the mid 1990s, when watershed modeling for the Fox River (Illinois) showed that urban runoff accounted for 85% of the nonpoint pollutant load. The county board adopted a construction site erosion control ordinance in 1992 and added post-construction stormwater standards in 1998.

The ordinance does more than just protect water quality. It is also designed to prevent flooding, which can cause property or crop damages downstream, or within the development itself. Basement flooding in particular has been a chronic problem in the county, leading to additional requirements in 2005. Based on soils and runoff data, these requirements aim to prevent flooding from both surface and groundwater.

After a series of heavy spring storms in 2008, Waukesha County was declared a “disaster zone” by the Governor. As a result, the county was provided $1.7 million in federal Emergency Assistance Program (EAP) funds, targeted for residential flood remediation grants. The Department of Parks and Land Use was charged with providing technical and financial assistance to 32 low- to moderate-income homeowners who suffered flood damages. “Our Land Resources Division (LRD) was uniquely qualified to manage this program because of their skills working with soils, groundwater, stormwater and construction issues”, said Dale Shaver, the department’s Director.

An analysis by LRD of the flood damaged homes showed that 80% were due to groundwater problems. Recent weather patterns led to record high groundwater levels in the county’s shallow sand and gravel aquifer, and widespread basement flooding. While LRD staff was well versed in the resource issues, they needed to quickly get up to speed on the latest products and services for remediating flooded basements. The City of Waukesha agreed to help out through a contract with one of their more experienced building inspectors.

An example project was a home owned by Barb Sinclair of Brookfield. “Contractors had many different ideas, and I wasn’t sure what to do,” she said. LRD staff helped evaluate the soil and water table conditions, finding the lot had up to five feet of fill over wet, organic soils. The selected plan included redirecting stormwater runoff in the backyard and installing a new interior drainage system in the basement floors. The LRD drew up the plan, solicited bids, and oversaw construction work. “I really appreciated the technical expertise of county staff in helping me deal with my flooding problem,” said Sinclair. “The new system works great. The basement is now dry, and I am very happy.”

“On some of the more challenging projects, there was a lot of brain storming going on in the office, which made things interesting,” said Perry Lindquist, Land Resources Manager.

In fact, one of the first projects the LRD worked on turned out to be one of the toughest challenges. While an exterior drainage system was being installed around the basement of an old Waukesha home, one of the walls completely failed. Further inspection showed the entire basement lacked adequate footings under the walls, and repair costs would exceed the value of the home. With the walls exposed and more rain in the forecast, the young family was immediately relocated while the LRD investigated their options. In the end, EAP funds were used to purchase and demolish the home. The replacement value allowed the family to relocate permanently on the other side of town. “I must admit, we were deeply concerned at first, but it all turned out well in the end,” said Sara Cohan, one of the owners. “We greatly appreciated the County’s assistance.”

Another example of the technical challenges the LRD faced were two very old homes located in the floodplain of an internally drained lake, predating current shoreland and floodland protection ordinances. The flat 540-acre watershed of the lake is made up of sandy soils, with a shallow water table flowing toward the lake. The 2008 flood caused the groundwater and lake level to rise four feet above normal and damage several homes. With no lake outlet, the flood water remained for several months, and returned again in 2010 compounding the damages.

A community EAP grant funded the design and installation of a one and a half mile long outlet pipe for the lake, which reduced the floodplain. However, LRD flow modeling showed the two homes in question still were at risk of flood damages. After discussing their options, both owners chose to flood proof their homes by lifting them two feet and constructing new foundations (with no basements). The LRD prepared bid documents, coordinated site visits and oversaw construction, while the homeowners were temporarily relocated. “It was a big job and took some time to work out the details. But everything worked out very well,” said Margorie Pett, one of the homeowners, who celebrated her 97th birthday during the project.

In two construction years, the EAP program funded 19 basement drainage systems, 18 land grading/stormwater projects, three anti-backflow valves on sewers, the lifting of two homes, and the demolition of two others (relocating the families). All of the projects were completed on time and under budget. “It was quite an experience, and we learned a lot,” said Lindquist. Shaver credited the LRD staff for an outstanding job working with a complicated program, often under some very stressful conditions.

Lindquist recently presented the results of the EAP program, along with the county’s flood prevention standards, at a of couple workshops for local builders, engineers and municipal officials. He said the feedback was very positive.

He also noted the county used a map of soils with high groundwater to update their Comprehensive Development Plan in 2009, to help direct future development away from those areas and avoid basement flooding. He said while it was rewarding to help people in need with flood remediation grants, the costs of the EAP program show that flood prevention efforts are much more efficient and effective.