Streambank Restoration in the Driftless Region 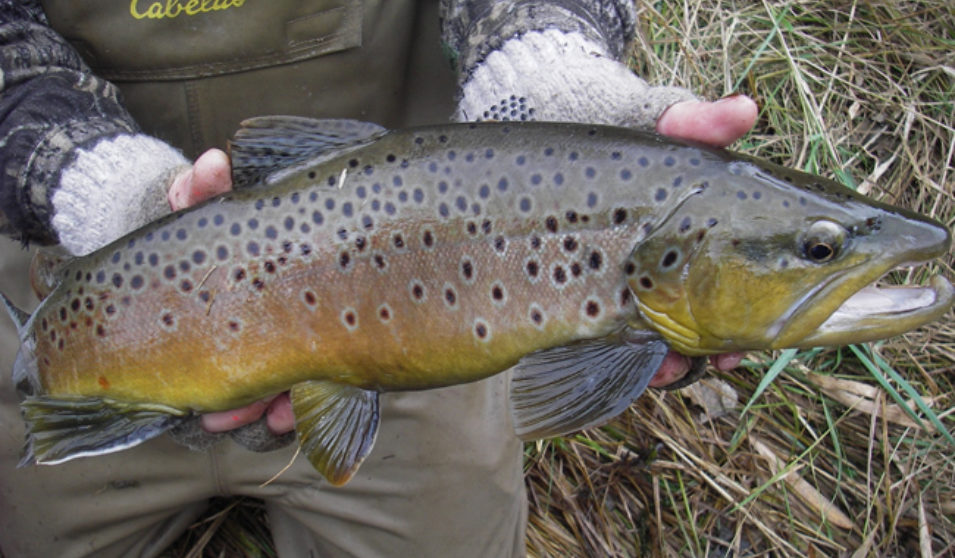 Winter is coming to an end, and the catch-and-release season of trout fishing in the Driftless Region will soon be in full swing. On the north face of the magnificent slopes the snow is still white and glistening, for a little longer. The snow on the south slopes has all but disappeared, and much of this winter’s blanket is now quickly finding its way down to the tributaries and headwaters of some of the finest cold-water trout streams in the world.

Cheyenne Valley Creek meanders clear and clean through the farm of Donnie and Carolyn Williams. The two have milked Jersey Cows here for over 40 years and they have built a way of life from caring for their cows and their land. “Carolyn and I either do this all together, or not at all. This farm has only worked because we are both a part of it, and it is a big part of us,” Donnie Williams explains.

“Farming near creeks can be difficult. Every so often it comes up and bites you,” says Williams. “We’ve had the flooding back up and cut serious ditches into our fields. Then the big ’07 flood tore into the banks, and then another flood came before we could do any repairs.”

Paul Krahn, County Conservationist for Vernon County Land & Water Conservation (LWCD) and lead technician for Williams’ streambank and animal crossing project, states, “We lose an incredible amount of soil from these eroding streambanks. We have seen large portions of farm fields cut into by the erosion, and all of that fertility is going to impact the trout habitat. Projects like Donnie’s are the best of both worlds. Our projects can help the farmer’s bottom line by keeping him from losing good ground.”

“Paul (Krahn) suggested we do a cattle crossing while we do the stream repair, and get two jobs done at once” explains Williams. “The stream looks great, and I really appreciate the cattle crossing. It saves time and money, and the best part is I don’t have to get on the highway so much anymore. The highway has gotten a lot more dangerous these days. Now that the stream is stable and we have the crossing, the grandkids can enjoy the stream more too.”

On the opposite corner of Vernon County is the beautiful trout stream, Elk Creek. The nicely grassed streambanks are teaming with brook and brown trout just waiting for a fisherman’s perfect cast. Twenty years ago, however, the picture was very different.

Every turn of this meandering stream was a high bank of rich, black top soil. Spring thaw and heavy rainfall would bring large sections of this soil into the stream. Uncontrolled cattle grazed along the stream corridor, trampling the banks and defecating in the stream. Barnyard runoff was direct and severe. This spring-fed stream would come out of the ground crystal clear, but become chocolate brown further downstream.

The landowner with the largest farm knew he had runoff problems and wanted assistance. The stream had moved from its original channel and threatened his freestall building. He also had a beef operation and serious runoff from the feedlot to the stream. The LWCD obtained a Department of Natural Resources (DNR) permit on behalf of the farmer, which allowed the re-aligning of the stream away from the building and the creation of two grassy filter strips between the stream and the animal lot. The streambanks were stabilized with rock-riprap and trout habitat “lunker” structures were installed. A concrete lot for 800 head of beef animals was constructed so manure could be retained, rather than run off into the creek. The farmer is now able to collect much more of the valuable manure, and remove the stigma of being a polluter of the stream. This was the first step in the stream getting healthier and the LWCD earning trust in the watershed.

Mark moved to his 300 cow dairy farm in 1998. He worked with the LWCD to install a machinery crossing in 2002. “Before the crossing he would travel half a mile to get to fields that were only 800 feet from his manure storage.” Krahn recalled. “He said it was the best investment he ever made. Mark was amazed that we would obtain DNR permits, design, bid, make construction inspections, and issue payments.” Krahn said, with clear enthusiasm. “This is when stream improvements really kicked into gear on this farm!” A total of 8,000 feet of stream were restored on this farm. At the same time Mark worked with the LWCD to address other concerns on his farm: a manure storage facility that needed improvements and a plan to spread his manure in an environmentally friendly manner.

The neighbors upstream and downstream liked what they saw happening to the stream and wanted to participate as well. By 2008, five other landowners participated in projects including stream crossings, soil conservation plans, and eight stretches of streambank improvements totaling three miles, all under DNR or Vernon County public fishing easements. Over years the LWCD, acting as the main coordinator, worked with multiple non-governmental and local, state, and federal government partners including: USDA Natural Resources Conservation Service, DNR, US Fish and Wildlife Service, student groups, and multiple Trout Unlimited chapters.

A 2008 study by Trout Unlimited, “The Economic Impact of Recreational Trout Angling in the Driftless Area” found that every dollar spent on stream restoration returns approximately $24.50 to the regional economy in a single year. Once restored, trout streams remain viable for many years, and continue adding to the local economy year after year. Accordingly, the true return on investment for each dollar spent on trout stream restoration is in fact hundreds of dollars, with a total economic impact of $5 billion in the Driftless Area of Wisconsin every year. LWCD staff develop relationships and trust over time which bears fruit everyone can enjoy: clean water, profitable farmers, and great fishing.