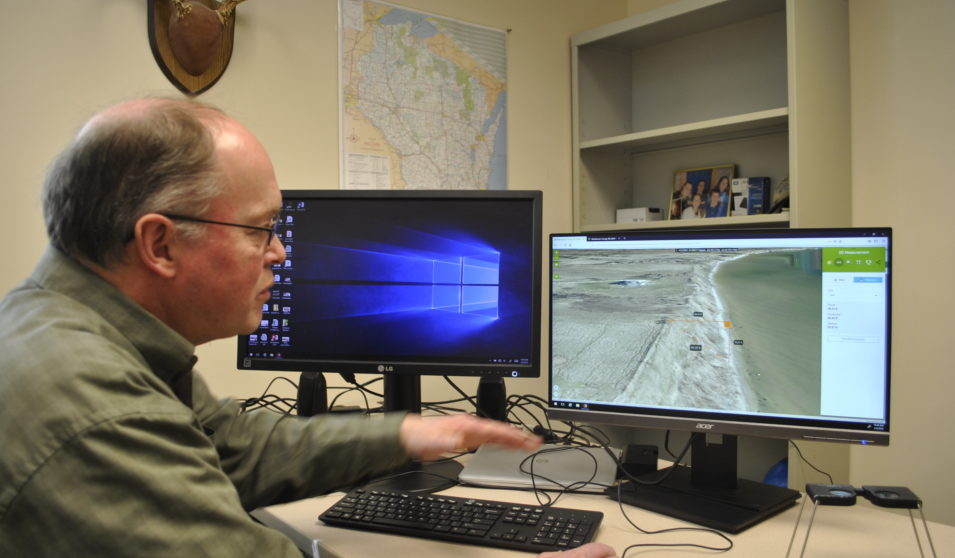 In the digital age, having accurate and sophisticated maps have transformed how we make decisions. For farmers and conservationists, mapping requires an even higher level of detail to understand how elevation and land features affect their work. Manitowoc County Soil and Water Conservation Department (SWCD) is on the forefront of developing some of the most advanced county land mapping in Wisconsin, and are providing them online for free to the public.

Manitowoc County SWCD’s three-dimensional maps bring a level of detail to the county land that would have been hard to fathom just a decade ago. Spanning approximately 602 square miles, the maps show all the land features across the county – land depressions, streams, trees, rock outcroppings, rooftops, and more – in a level of detail at two data points per square meter. In total, the maps harness over six billion data points, enabling anyone to finely measure the county’s topography from their computers.

The massive dataset was first collected in 2015 by Ayres Associates using a drone equipped with LiDAR technology. LiDAR, which stands for Light Detection and Ranging, measures distances using light in the form of laser pulses. The data was then provided to Manitowoc County SWCD, which worked with Esri to build GIS maps that could be available for the public.

Manitowoc County has always housed maps for the public, providing invaluable land information for farmers, realtors, businesses, and public works. One of the biggest limitations of old, physical maps was that they were inherently two-dimensional. Even as digital mapping became prevalent, most maps did not display the third dimension, which is depth. One of the only ways to get close to seeing depth on a 2D plane was to use special 3D glasses, called a stereoscope.

“We used to look at aerial photographs taken from a plane through a stereoscope to get a rough idea of the ground depth in an area,” recalled Bruce Riesterer, Manitowoc County SWCD Resource Conservationist, as he aligned two photographs underneath an old stereoscope on his desk. “It only gave us a limited view of what the ground actually looked like without us going out to the site.”

Before maps were online, citizens would have to request to see county maps in person and consequently, maps often did not see much use beyond meetings and on-site visits with farmers. In contrast, the county online GIS maps today have received thousands of view and the public can access the maps at any time.

For the Soil and Water Conservation Department, the maps help inform much of what they regularly do, from nutrient management plans and CREP buffers to erosion control structures and culvert locations. For the county conservation staff, the 3D LiDAR technology is now an instrumental tool in how the department evaluates problems and plans projects. Without having to step out into the field, the county is now able to collect preliminary measurement for any distance or area across the county using the 3D LiDAR maps.

“The two most valuable tools on these maps for us are the slope and hillshade functions,” said Riesterer, as he zoomed in on a county road near Manitowoc Rapids. “For instance, I can see this road has a steep embankment from the hill shading. Using the distance tool, I can calculate that the height of the bank is 9.60 feet and the width is 21.64 feet.” 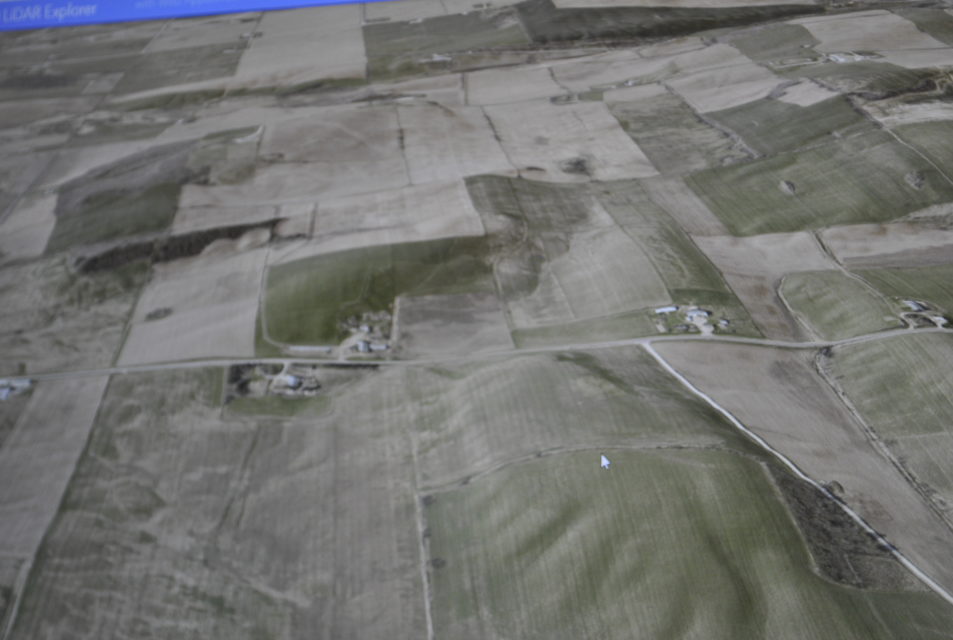 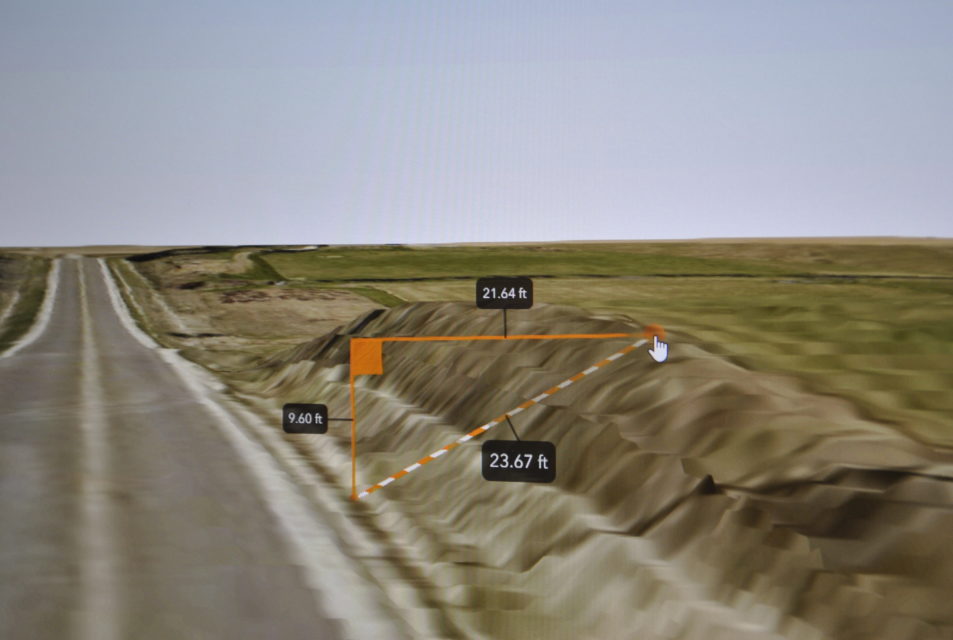 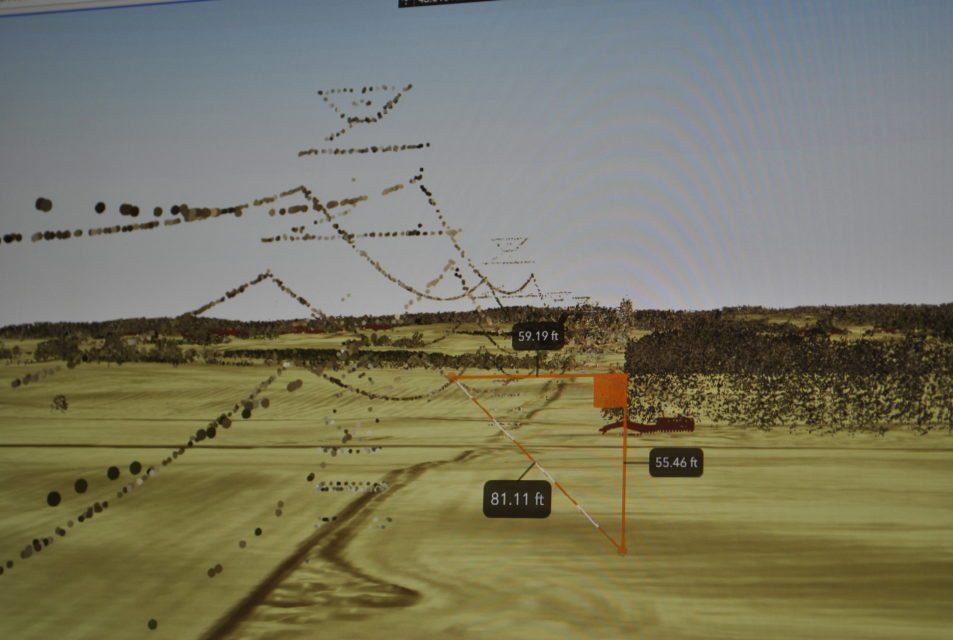 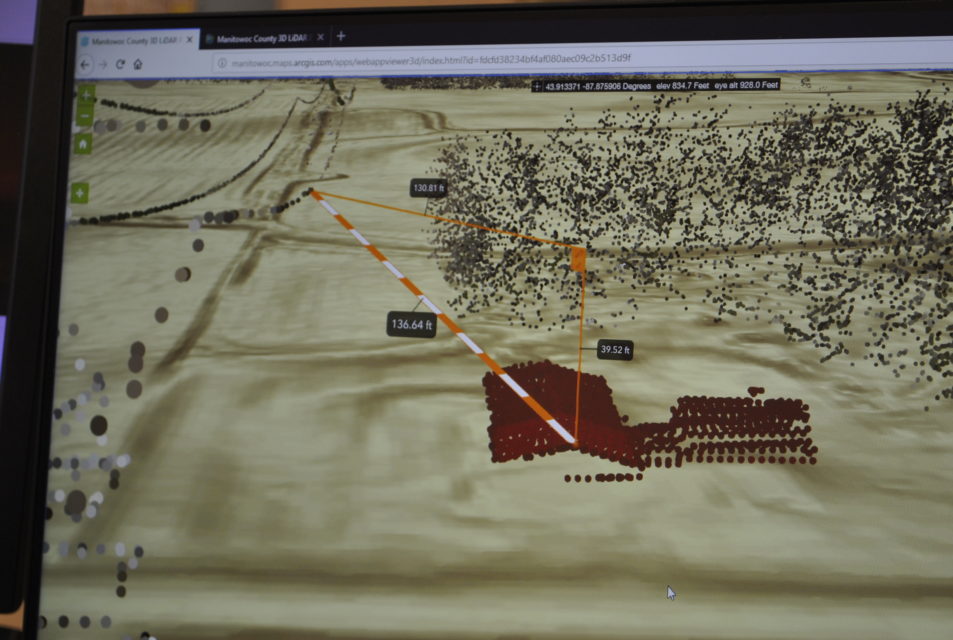 Before the 3D mapping, the county would have had to drive out to that roadside and physically measure the embankment. Now, it can all be done in a matter of minutes from a computer with the same degree of accuracy, ultimately saving the county an incredible amount of time and money.

More recently, Riesterer has focused on synchronizing much of the county’s GIS data with their 3D LiDAR mapping. This is especially important in mapping areas in Manitowoc that were at risk for groundwater contamination.

In the karst region of northeastern Wisconsin, Manitowoc County has pockets of land where the surface to bedrock is less than 20 feet, which are highly susceptible to nutrients leaching into the groundwater and can result in drinking water contamination. In those shallow areas, farmers and landowners must adhere to fertilizer and manure spreading restrictions during certain periods of the year.

Riesterer and the Manitowoc County SWCD combined their LiDAR data with U.S. Geological Survey data to create an estimated depth-to-bedrock map. The Karst and Bedrock Features map also denotes sinkhole locations, as well as rock outcrops, quarries, and areas where water runoff is a direct conduit to groundwater.

“We’ve crossed-referenced this map with a lot of well records and it’s been very accurate,” said Riesterer. “When we work with landowners and farmers, we use this map with the SNAP maps to make sure we’re giving the public the best information we can. Ultimately, this helps everyone make the most informed decisions for each parcel of land.” 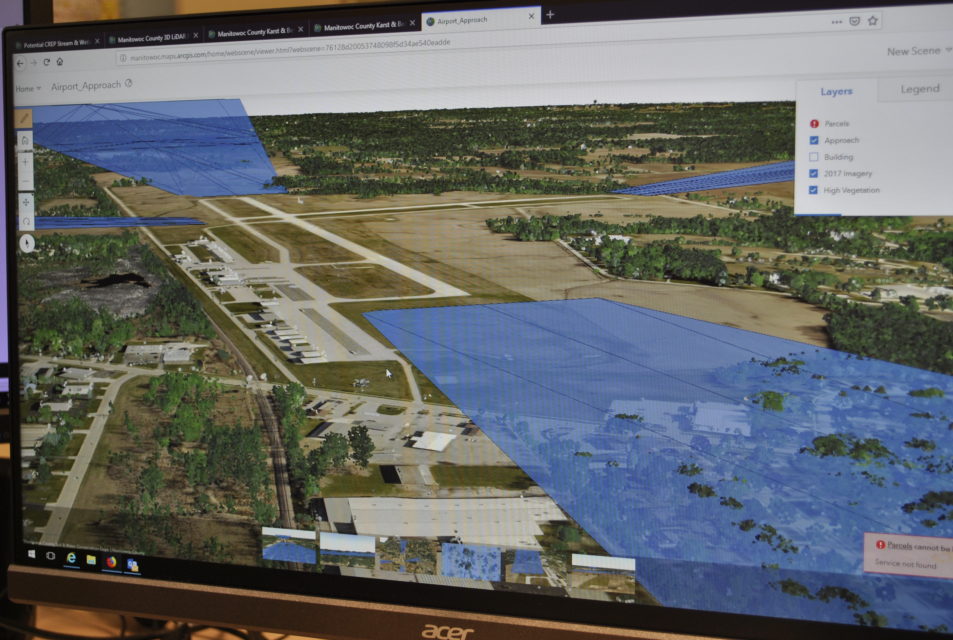 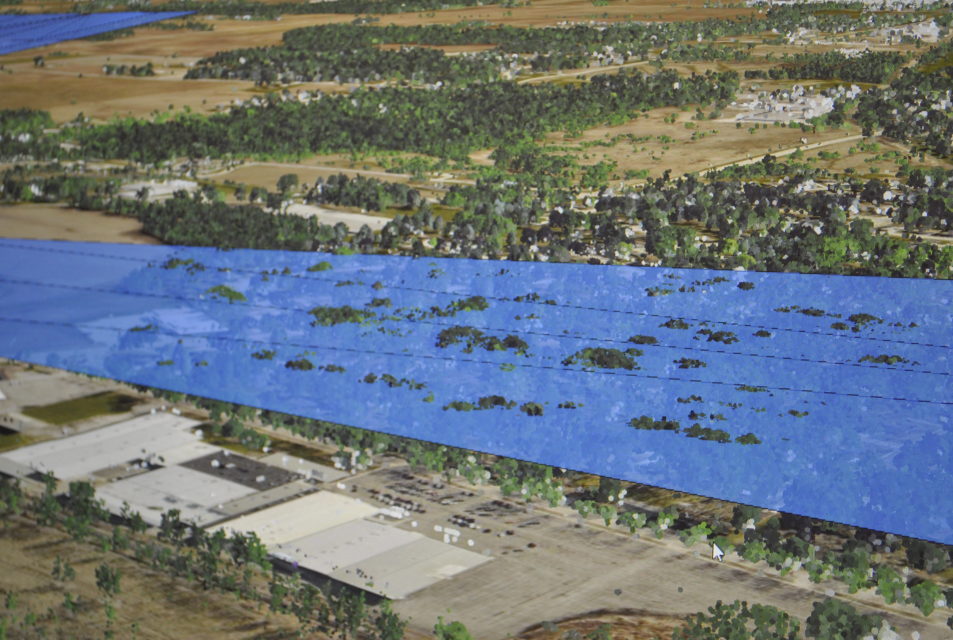 Other county departments in Manitowoc are also benefiting from the LiDAR mapping. The Manitowoc County Airport worked with the County Highway Department to trim the tops of trees that were encroaching in the airspace around one of the airport’s runways. An initial estimate stated it would cost the county around $10,000 just to survey the area to determine which trees needed to be trimmed. Being one of the first counties in Wisconsin to be able to map all the trees in the county in 10-foot height increments, Manitowoc County was able to determine which trees around the airport needed to be trimmed using their LiDAR data instead of a survey.

Others can also use the publically available maps provided by Manitowoc County. Steve Hoffman, President and Senior Agronomist at InDepth Agronomy, uses the county’s LiDAR data on a regular basis to accurately measure field slopes. This enables his company to better plan crop rotations and soil conservation practices for individual fields.

“We are able to provide spreading hazard maps to our clients that show slope ranges with a much higher degree of accuracy than was previously available through the NRCS Soils Survey,” said Hoffman. “As an independent crop consulting company, we work closely with the Manitowoc County SWCD to help our customers improve their environmental footprint. Bruce Riesterer has been very willing to help our company utilize the county’s LiDAR data in our own GIS system.”

Adapting the LiDAR data is an important step for agriculture to help farmers better understand the unique contour features across their fields and more accurately control for runoff, erosion, and soil loss. When companies like InDepth Agronomy have access to highly detailed data, they are able to enhance their own datasets and ultimately help improve soil health across the county.

“Having GIS-processed LiDAR data available as a free resource greatly improves the ability of farmers and their advisors to minimize the negative effects of farming on water quality,” said Hoffman. “LiDAR data is a powerful tool with a myriad of uses that will improve the productivity of industries that deal with land features. The benefits of making this data available as a free resource are countless.”