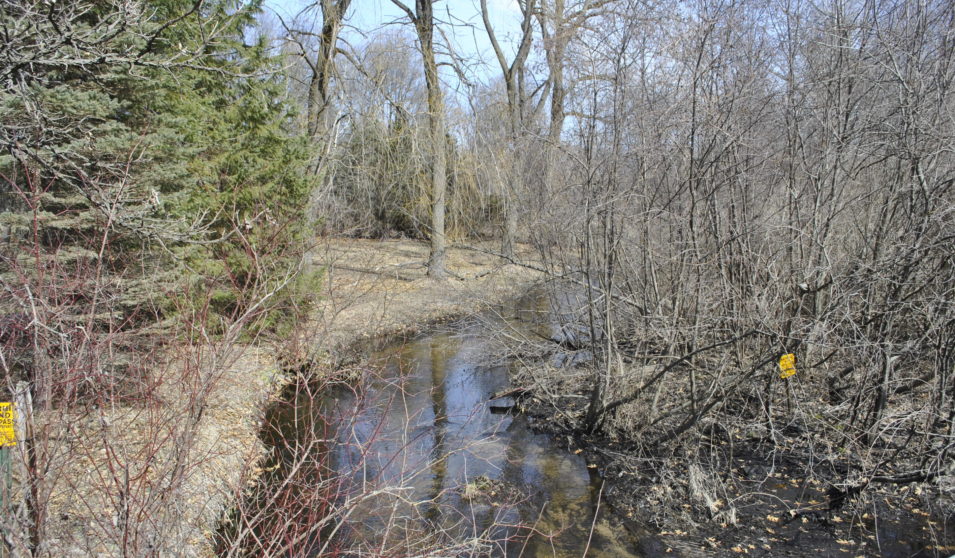 Last October, a crowd of about 50 people gathered in a farm field east of the Village of Plover to watch a dozen shovels sink into the sandy soil. The groundbreaking ceremony officially kicked off the Little Plover River Watershed Enhancement Project, a multi-organization approach to restore one of the most notoriously endangered rivers in Wisconsin.

Described as a “landmark moment” by Wisconsin State Senator Patrick Testin, the ceremony indeed marked a significant step in reversing years of uncertainty with tangible progress. The project, a collaborative effort between the agricultural industry, conservation groups, multiple levels of government, and citizens, would have been hard to envision just a decade ago when dead trout found in a dried, cracked streambed of the river made headlines across the state.

What has transpired around the Plover community’s fragile watershed over the past five years was no small feat; the stakeholders and investments behind the Little Plover River Watershed Enhancement Project reflect the determination of local leaders and citizens to work together to improve the river – an integral part of the community’s identity.

A tributary of the Wisconsin River, the Little Plover River’s surface water basin is relatively small, extending roughly 21 square miles through the Village of Plover and east into Portage County. Between 80-90 percent of the river’s water comes from groundwater, rather than from surface water runoff. This is a distinctive feature in the Central Sands region of Wisconsin, where rainwater and snowmelt are quickly absorbed into the sandy soils and naturally discharge in adjacent waterbodies.

Since 2004, low water levels and dry-up events have annually plagued the Little Plover River. This is a result of the cumulative impact of high capacity wells dramatically altering the aquifer and groundwater flow throughout the area. Fortunately, decades of research and monitoring of the watershed by University of Wisconsin-Stevens Point (UWSP) and others gave experts a strong starting point to addressing the problem.

“The first reported dry-up led to the concern that a real change was happening [in the watershed] because of high capacity wells,” said Dan Mahoney, Administrator for the Village of Plover. “Any high capacity well affecting the aquifer that feeds the Little Plover River – which includes the Village of Plover’s municipal water system, industrial users, or agriculture – became a big concern. We were aware of this because of the efforts of Professor George Kraft and UWSP’s Groundwater Center, who studied this for years and were the first to call attention to the issue.”

“Early on, the Village stepped forward and changed the pumping rates at its wells. We also began conversations with the Potato and Vegetable Growers Association and Del Monte to start affecting some change in water consumption and practices,” continued Mahoney. “But once we saw the issue was the entire watershed, and not just within and immediately adjacent to the Village, we realized the need to expand efforts to include the entire watershed.”

By the late 2000s, reoccurring dry-ups and related concerns in multiple waterbodies throughout the Central Sands area began to draw public attention. Long Lake, a trophy bass lake 20 miles south of the Little Plover River, dried up completely in 2006, killing all the fish and diminishing waterfront property values. Meanwhile, market demands drove a rapid expansion of irrigated agriculture in the area and high capacity wells continued to be installed. By 2013, the Little Plover River was named one of the most endangered rivers in the country by the conservation group American Rivers.

That same year, the Wisconsin Department of Natural Resources (DNR) commissioned a study to evaluate the Little Plover River’s flow and groundwater levels on a monthly basis to assist with water management. A state-of-the-art, 3-D groundwater flow model was developed as a tool to precisely simulate the interactions between groundwater withdrawals and streamflow. The Wisconsin Geological and Natural History Survey and the U.S. Geological Survey conducted the three-year study.

Although the study was an incredible step forward for the watershed, local leaders and stakeholders understood that scientific precision would develop solutions, but not necessarily implement them. To be able to get practices on the ground, a high level of collaboration was needed from government agencies, scientific experts, agriculture, conservation, and the public.

“What has brought many people together is the mutual understanding that the environment and the economy are tied together. Somehow, we had to find a way to accommodate both those things and make our solutions work for everyone.”

A multi-phased project plan was developed for the watershed and put into action in 2017. The plan, which is expected to continue to be carried out over the next five years, addresses both voluntary water conservation needs and on-the-ground conservation work.

Phase 1, which began in 2018, involves developing specific water conservation targets throughout the watershed, conducting channel improvements and forest management, wetland and prairie restoration, filling of drainage ditches, the restoration of 60 acres of farmland at the headwaters to wetlands and prairie, as well as a decommissioning of a high capacity well. Phase 2 will encourage voluntary on-farm soil and water conservation practices within the watershed. 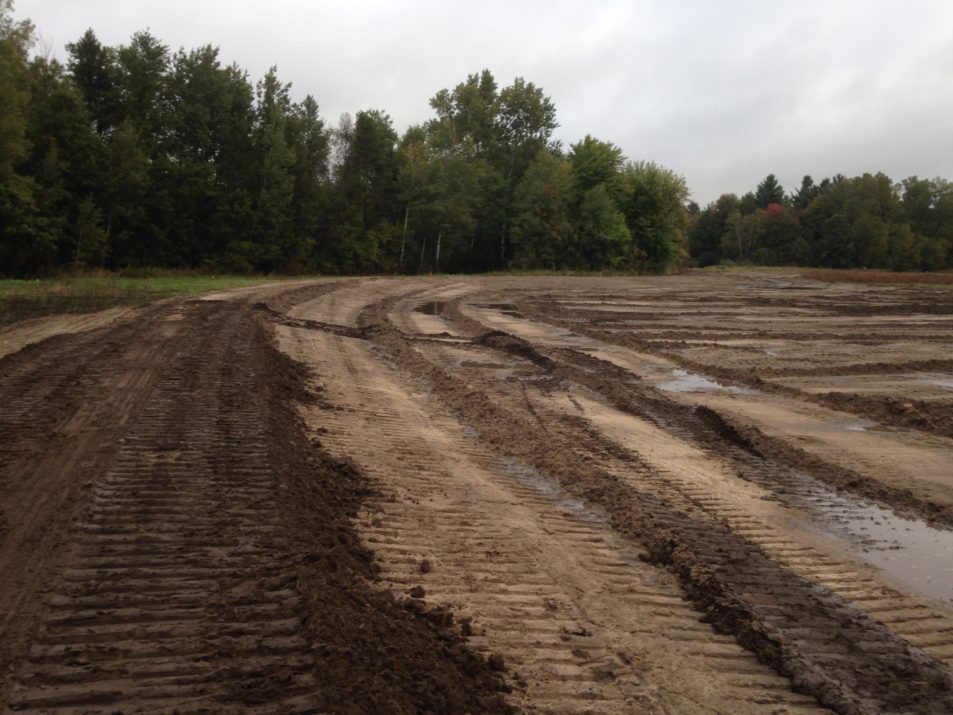 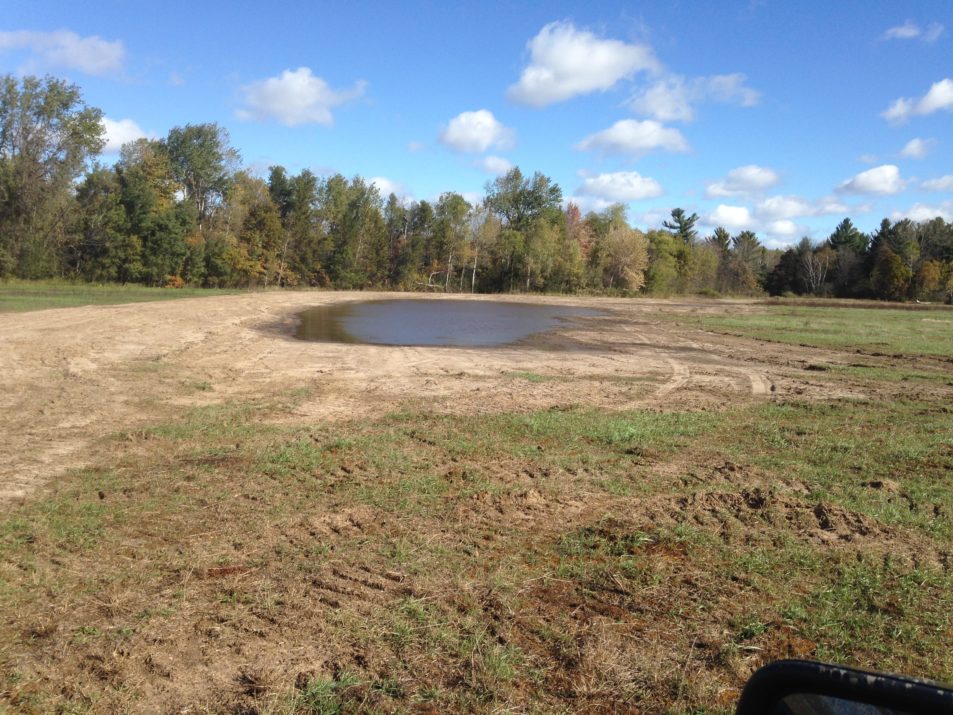 Following the groundbreaking ceremony last fall, two large, shallow berms were constructed along one of the wetland restoration sites to trap water and increase infiltration with the goal to develop the site into a wetland within a year. Restoring formally irrigated land back to native prairies and wetlands is an incredibly effective way to naturally enhance the volume of water flowing into the Little Plover River.

“There’s approximately 100 acre-feet of water that’s impounded in these two areas,” said Dan O’Connell, Portage County LCD Conservation Technician. “After such a heavy snowmelt and early spring rains, those berms are already proving to hold back water and infiltrate it, which is promoting the flow into the Little Plover River.”

“In a technical sense, installing a wetland restoration area over reclaimed farmland is a basic conservation practice,” said Drew Zelle, DATCP Environmental Specialist. “To determine what best fit the site, we followed the requirements set forth in the wetland restoration technical standard developed by NRCS.. In these kinds of straightforward situations, using conservation practices that require minimum input for maximum gain is a commonsense way to make a positive impact in the watershed.” 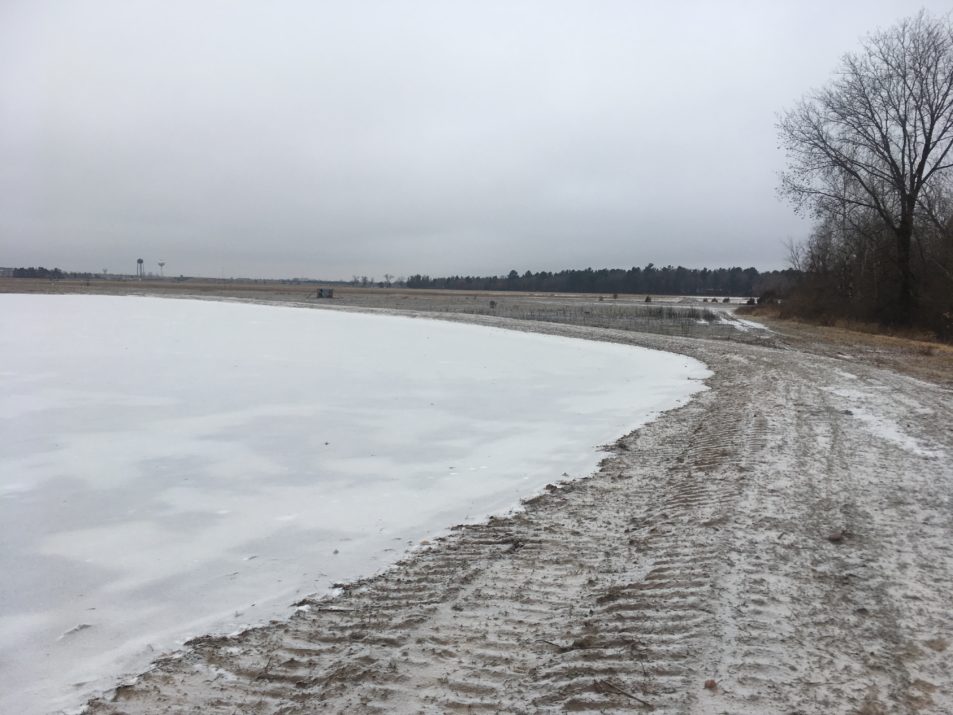 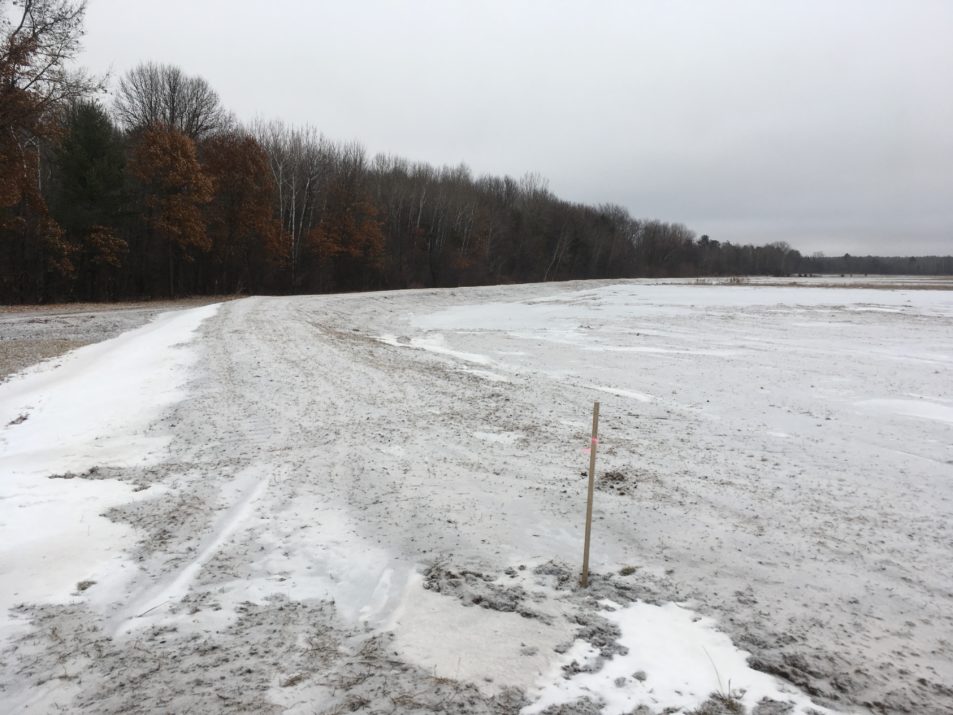 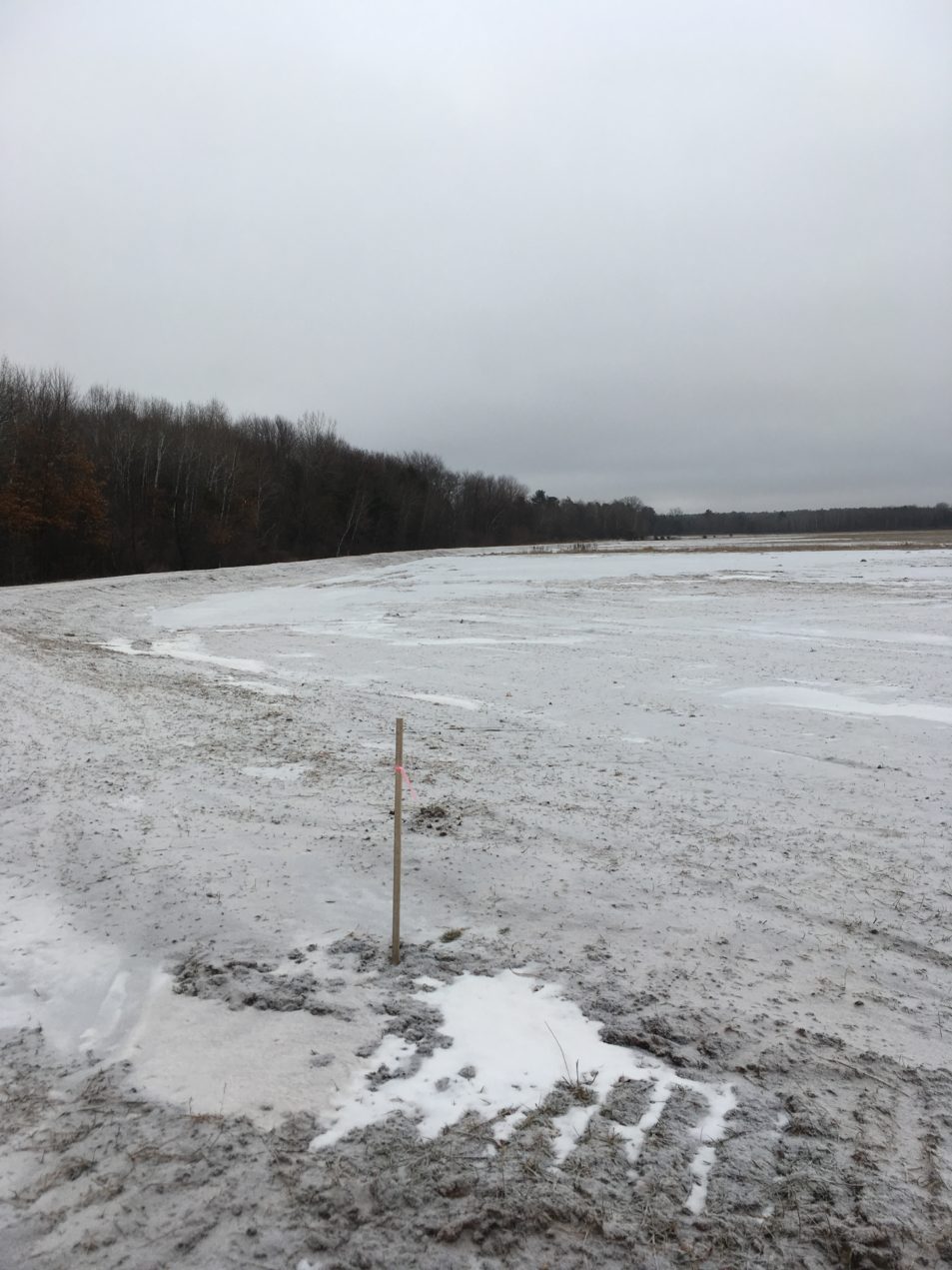 Collaboration with farmers and landowners to implement a variety of commonsense land and water conservation practices is a defining component of the project’s success. Tamas Houlihan, Executive Director of the WPVGA, sees the cooperation from farmers as a testament to the project’s collaboration.

“This [project] is demonstrating how a number of different stakeholders with varied interests can work together to voluntarily find solutions to complex and sometimes difficult situations,” said Houlihan. “This is important because the Little Plover River is an outstanding water resource located within the heart of a major potato and vegetable production area. We have brought multiple farms together to discuss issues, share ideas and work toward finding solutions to problems for the betterment of the industry, as well as the entire state in which we live and work.”

Ensuring farmers and landowners feel heard and have the option to participate in both large and small capacities has been a particularly important way the project has earned the public’s trust.

“We are out getting to know the landowners and learning about their water management and production needs and challenges,” said Tracy Hames, Executive Director of Wisconsin Wetlands Association. “They know the land and water [in Portage County] better than anyone, so our work is to learn from them, explore the ways in which their needs and the project goals align, and invite their participation to help implement solutions.”

The project’s collaborators are focused on the next round of improvements to continue to restore the Little Plover River to a stable and healthy condition. But for all the organizations involved, the success of rallying a diverse group of stakeholders around the river is already a remarkable achievement and could potentially serve as an example for other locally led initiatives across the state.

“We truly hope there are lessons to be learned here about how groups can be brought together, comprising all these diverse interests, to really make a difference,” said Mahoney.