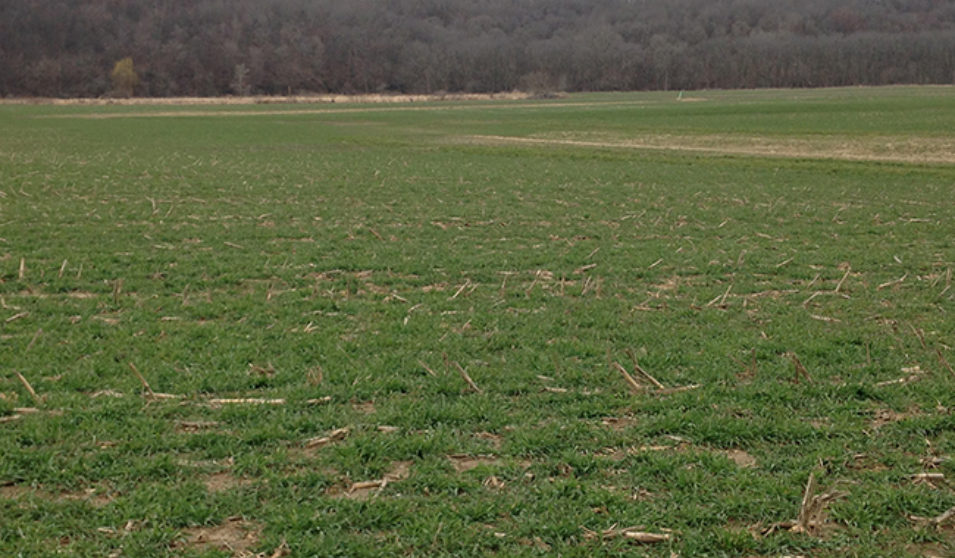 Joe and Jon Meyer are brothers who share a 1,200 acre farm with 400 Holstein cows. They are fourth generation farmers and produce a variety of crops including corn, soybeans, alfalfa, clover, wheat, oats, and cover crops. Their land, which lies in Sauk County, is in the Baraboo River Watershed, which drains into the Wisconsin River and eventually to the Mississippi River.

The brothers started no till farming on portions of their land in 2000 and are looking to become 100% no till this year. No till farming is a way of growing crops without disturbing the soil through tillage, which has economic and environmental benefits. While the number of farms participating in this method have been increasing, the 2012 Census of Agriculture found only 5% of farms in Wisconsin to practice no tilling.

Two years ago, the Meyer brothers also started experimenting with cover crops on their already no-till operation. That was when they starting talking with the staff from the Sauk County Conservation, Planning, and Zoning Department (CPZ) to learn more about cost sharing programs through the Regional Conservation Partnership Program (RCPP). This program allowed the Sauk CPZ to work with farmers in the Baraboo River Watershed to reduce sediment and nutrients delivered to the Baraboo River. After their conversation with the Meyer brothers, the two committed to planting 120 acres of cover crop and also fix a large waterway on their property.

Since the planting of the cover crops, the Meyers have seen multiple benefits. The biggest improvement has been a significant reduction in erosion. When comparing ground that had a rye cover crop to one with no cover, Joe noted that the “bare ground where you chopped from, there is erosion that you can see. Where we have the rye it is perfect.”

In addition to reduced erosion, the Meyer brothers have noticed less weeds and better field conditions in the spring. These benefits have convinced the brothers to continue cover crops on their operation, even without future cost share assistance. They will also partner up with the Sauk CPZ to experiment with different cover crop mixes to add variety to their cropping systems and repair damaged grassed waterways.

“Joe and Jon are great guys you want to work with,” said Chris Miller, NRCS District Conservationist in Sauk County. “They keep an open mind and are willing to try new things.” Members of the Sauk CPZ staff have also noticed the benefits of these programs and the positive effects it can have on farmers like the Meyers. “The RCPP program has really helped us encourage farmers in the watershed to try cover crops,” said Serge Koenig of the Sauk CPZ. “Once [farmers] see the benefits, they continue planting covers on their own.”