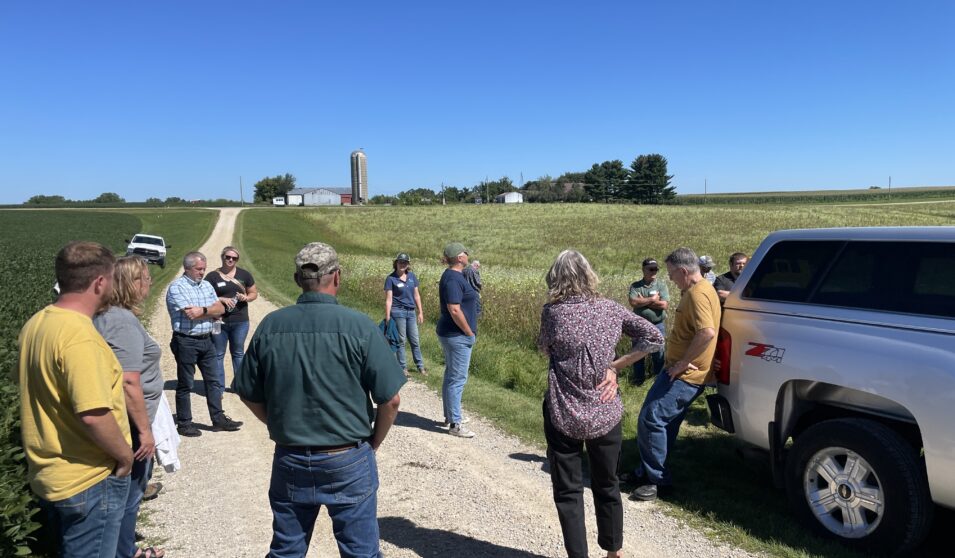 The group started the morning at Lucky Cow Coffee & Gelato, which is owned and operated by Darlington farmers Amber and Joe McComish. The idea for the shop grew from their dedication to continuing their family’s farm legacy and their understanding that success for family farms often means diversifying. The assorted gelato flavors available in the shop are made from the milk produced by their own cows. Visitors to the shop can learn more about those cows by asking for a brew named after one of Amber’s favorites—Blaze, Flare, or Vana. This cozy coffee shops nestled on Main Street highlights the value of farm to freezer for both producers and customers.

After sampling a range of frozen and baked treats, the group traveled to learn about another sweet spot where honeybees are the customer. Since bees overwinter in the area from June-September, Wisconsin is one of the top five producers of honey in the United States. Those months are critical for the hives, and requires they have access to diverse forage in order to build up strength for the winter. Many of the bees are transported by truck to southern states, where they work to pollinate oranges and almonds.

Jason Thomas, District Conservationist for NRCS, discussed ways that landowners can support pollinators through available EQUIP funding. The NRCS program assists landowners who have at least five honeybee colonies within a mile of the area in planting up to 12 acres with a pollinator mix. The mix included buckwheat, oats, crimson clover, sunflower, flax, pearl millet, German millet, oilseed radish, and phacelia. The planted area must remain undisturbed, and no herbicides can be used after planted. Most problematic weeds and grasses are shaded out, and the deteriorating radishes and clovers will provide nitrogen for the soil.

The final stop of the tour took the group to Roelli’s Cheese Haus to meet fourth-generation cheesemaker, Chris Roelli. Known for his award-winning original recipe cheddar blue cheeses, Chris produces approximately 200,000 pounds of cheese each year. Chris credits much of his success to the quality of the single source local milk he uses from Peter Cernek Family Farms—just a short 6-miles from his factory.

Although Chris has shared his recipe with others, they say it’s just not the same. While this might have something to do with the Roellis 100+ years of experience, Chris suggests it has just as much to do with place—from the Cernek milk to the lime-stone filtered water from his well. The master cheesemaker pays homage to his community by naming his cheeses after well-known spots around the area, such as Dunbarton Blue, Red Rock, and Gravity Hill.

These three stops highlighted the interconnectedness of the local community in Lafayette County. By working together, landowners and artisans can ensure that everyone—from buzzing bees to shop regulars—can experience a taste of place.