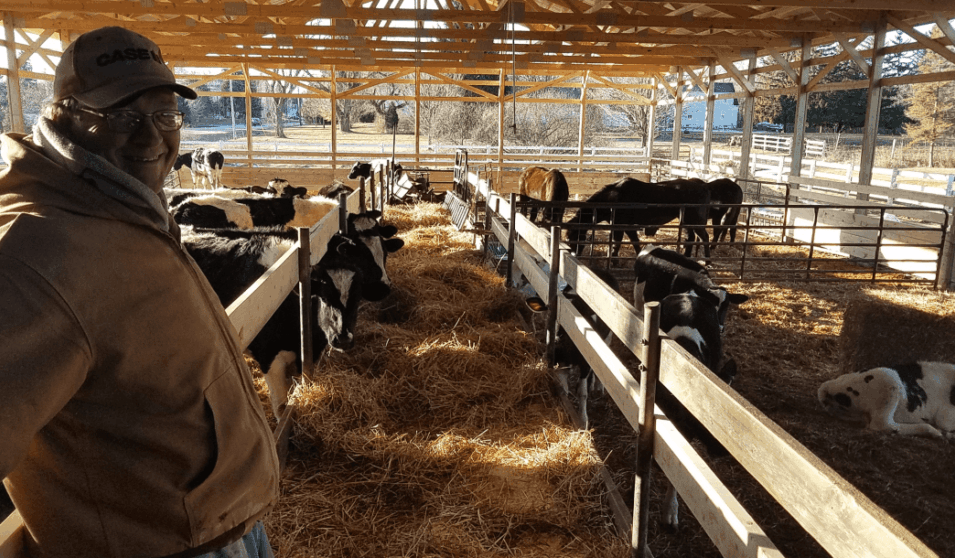 On the edge of Germantown where urban transitions to rural, Jim Stout raises steers, pigs, turkeys and chickens. His feedlot ends just 40 feet from the west branch of the Menomonee River, and rain events sometimes bring feed and excrement down to the water.

Paul Sebo, Washington County Conservationist, has been trying to solve this runoff issue for nearly two decades. When Stout took ownership of the land and farming operation from his brother, there was a renewed opportunity to make it happen. Because of the feedlot’s proximity to the river, a roof runoff structure was the only viable option. Stout was happy to comply.

His animals spend a good part of their day in the feeding area, which means they often have to relieve themselves there. During rain events, manure gets washed off the concrete feedlot and into the river - unless there’s a roof over the feedlot to stop runoff from happening.

That’s not the only benefit of the roof, though. It keeps the animals warm and dry in the winter, allowing them to grow bigger, faster and live happier lives, said Stout. It’s also made chores easier and less time-consuming.

A contractor by trade, Stout was able to construct the roofing system himself. Public cost-share dollars, provided by a DATCP Soil and Water Resource Management (SWRM) grant, offset the cost of construction by 70 percent.

“Working with the county was a very positive experience. I was happy with the whole process,” said Stout. “Sebo actually came and helped build the structure for a few days, so that was fun.”

The roofing structure has eliminated waste runoff to the river, but Stout didn’t stop there. He’s now converting some of his cropland to pasture grasses and working towards rotational grazing for the grass-fed beef market.

Stout grows some crops for feed and wants to be able to grow them as efficiently as he can. He’s not a big fan of chemicals, and his animals produce a decent amount of manure, so he wants to know the best methods and places to apply it. This inspired him to attend Washington County’s Nutrient Management Certification Course, where he’s generating a new plan to manage the nutrients on his farm.

Stout, among many other producers in the region, is committed to working for soil and animal health. With help from county land and water conservation departments, this is an attainable goal.