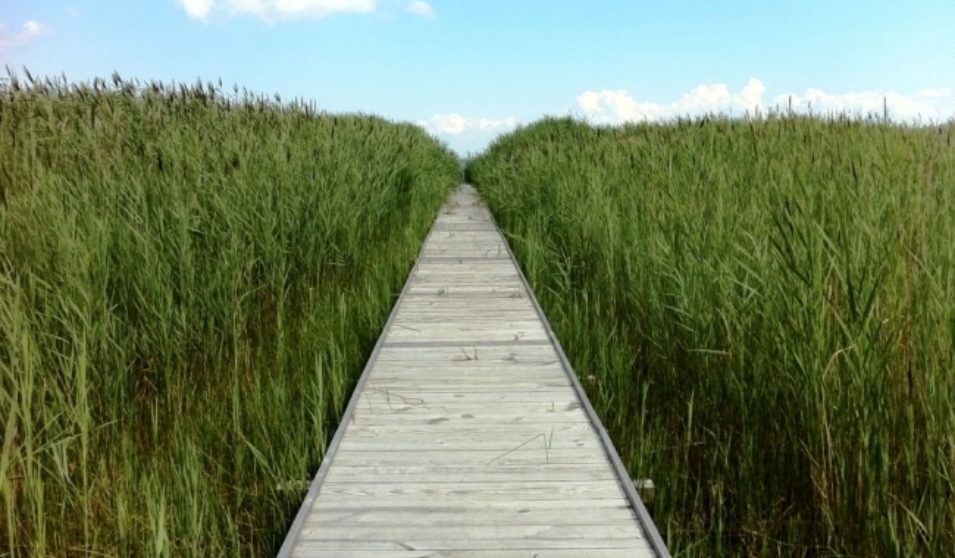 Battling exotic species is nothing new for Wisconsin Counties. Neither is working with partners. Land and Water Conservation Departments (LWCD) have long been on the front lines, facing Gypsy Moths, Eurasian Water Milfoil, Rusty Crayfish, Zebra Mussels, and many others. It is common for LWCDs to partner with state and federal agencies, local governments, lake groups, and landowners on projects. They administer grants, educate people about invasive species, carry out control efforts, provide technical knowledge, and help lake groups build momentum and membership.

September 2013 marked the end of a three-year Phragmites (common reed) control project in Brown, Door, Kewaunee, Manitowoc, Marinette, and Oconto counties. Phragmites first appeared in northeast Wisconsin in the 1980s but became a serious problem as Lake Michigan water levels declined. Phragmites is an extremely aggressive plant native to Asia and grows well on the exposed lake beds and wetlands. It has few enemies in Wisconsin and quickly out-competes native plants. Phragmites grows up to 15 feet tall, and its dense growth prevents people and wildlife from walking through the beds. Landowners often cannot access their shoreline or even see the water.

By 2007, Phragmites dominated Lake Michigan shoreline in the six counties. The average width of the Phragmites beds was 210 feet. “Shoreline Weeds Could Cause Wildfire Disaster” shouted the February 13, 2008 Peshtigo Time headlines. Landowners were desperate for help. Unfortunately, no single agency had enough staff or funding to deal with a problem this large. Help finally arrived in 2010 with US Environmental Protection Agency’s Great Lakes Restoration Initiative (GLRI). Marinette County hired an Aquatic Invasive Species Coordinator in 2009, which allowed the funds to be use immediately. “We knew it was just a matter of time until resources became available,” stated Marinette County Conservationist Greg Cleereman. “When they did, we wanted to have staff in place to put grant funds to good use.” The GLRI provided $806,626 to control 3,000 acres of Phragmites along 118 shoreline miles. The Wisconsin DNR served as grant applicant and project leader. LWCD assisted with the application, performed education and outreach, provided technical assistance, and contacted hundreds of landowners.

With a successful application, the real work began. The best control for larger areas is a pesticide sprayed from the air and it is very important to spray a large area at one time. Phragmites is a tough plant. Any small section missed with spray can be a source of infestation. Before any shoreline could be sprayed, county staff needed to get written permission from landowners. Contacting landowners and developing spray maps dominated the workload early in the project. Many landowners wanted Phragmites gone but worried about the spraying of the pesticide. The LWCDs hosted public meetings, sent out mailings and news releases, and met with local officials to respond to people’s concerns. Staff met with the more reluctant landowners on an individual basis.

Aerial spraying is very technical involving the Global Positioning System and county Geographic Information Systems (GIS). GIS data was used to determine the parcel ownership, create mailing lists, and develop accurate spray maps. The Marinette County LWCD received responses from 97% of landowners and 304 out of 307 respondents gave permission for their property to be sprayed. According to Heidi Springborn, GLRI Project Coordinator, “The project could not have been done without the work of County Staff.”

The DNR hired a contractor to spray the Phragmites beds in fall 2011. The contractor used the county GIS data to target only the parcels of the participating landowners. County staff were on the ground to help monitor the treatment and to updated landowners and the public about the spray activities. The spray took 10 days to complete using a helicopter.

In 2012, the DNR ground sprayed areas deemed unsuitable for aerial spraying due to nearby trees, power lines, and other hazards. County staff continued to publicize the project and respond to local landowner questions.

The aerial spray was quite successful, killing about 95% of the Phragmites (see picture). Follow up spraying was equally effective. Some ground spraying is scheduled for 2013, and educational efforts will need to continue even as the project winds down. Staff shall remind landowners that the spray project greatly reduced Phragmites but did not eliminate the plant. Large beds of Phragmites will return if neglected. The GLRI project leveled the playing field; reducing Phragmites stands to the point where landowners can control it on their own. “Landowners must remain vigilante to Phragmites from reinvading their shoreline,” says Robert Ruleau, Marinette County Aquatic Invasive Species Coordinator. “Full eradication is unlikely, so yearly maintenance will be commonplace, similar to keeping your lawn in check.”

Even as the grant project ends, the LWCDs efforts go on. Education efforts will continue. Landowners must be trained to deal with Phragmites and to avoid new infestations. Small-scale control projects will be locally led for property owners unable to perform their own maintenance. In a race against invasive species, there is no finish line.