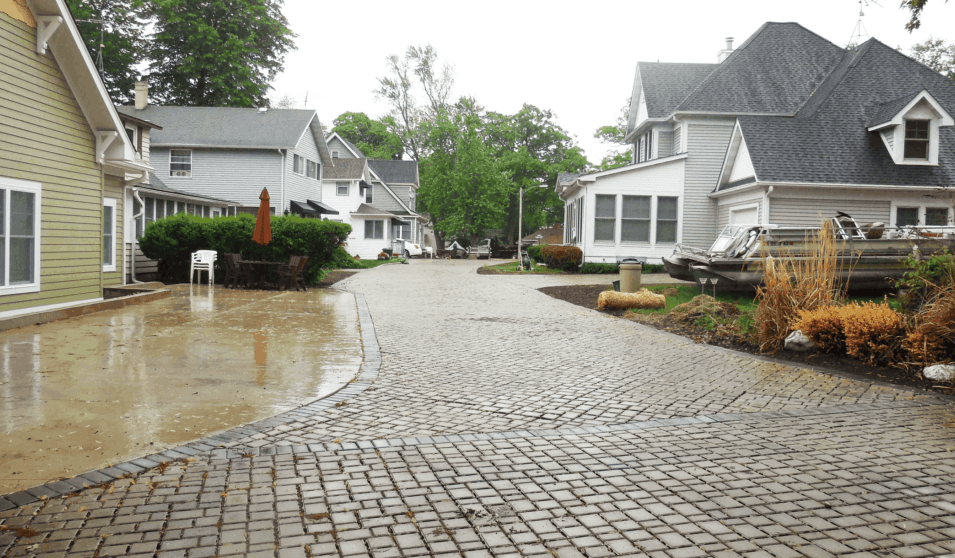 Brittle and cracking under the cool autumn sky, the asphalt roadway in Delavan Lake’s Assembly Park subdivision was in need of serious repair or replacement. Residents knew the road was constantly being patched up on the surface, but they had other concerns, too – mainly, water quality and stormwater runoff.

There was no stormwater system in place, so anything left on the road during a heavy rain or snow was washed into the lake – an issue that had become a pressing concern for members of the community in recent years. Rather than replacing the asphalt and installing a pricey stormwater management system, the subdivision association voted to bargain on an alternative that would solve both issues: permeable pavers.

Pavers are a system of interlocking stones separated by small gaps that allow water to pass through. Underneath them is a reservoir created to hold water until it can infiltrate the ground below it, recharging the aquifers instead of spilling into the lake.

Pavers have been proven to increase water quality, reduce runoff, prevent flooding and combat winter ice. Despite the many benefits, some were skeptical about installing a pervious roadway system in Wisconsin’s changing climate, said Rachel Tranel, the project engineer.

“Sometimes the pavers pop out or fail in certain areas, but they’re finding that that’s been very rare,” said Tranel.

Many permeable paver systems are plowed with a rubber version because a standard plow might pull up the pavers more easily. Assembly Park purchased a rubber plow and they’ve had no problems so far; the pavers have actually reduced winter maintenance.

After snow falls on asphalt, it melts during the day and the water turns to ice at night when temperatures fall. Pavers are less likely to ice over because temperatures underneath the system are typically warmer, and when the snow turns to water, it trickles down through the gaps.

“That’s one thing Assembly Park mentioned to me – they aren’t experiencing as much ice,” said Tranel.

The pavers do require some maintenance to keep them working right, though. They occasionally need to be “vacuumed” in order to get rid of the sediment that collects in the reservoir, but a storm sewer system would require this as well.

It’s been two years since the pavers were installed, and they seem to be working out for Assembly Park – residents love the look, and many have chosen to replace their existing driveways with them. However, there is little data to prove their effect on water quality in Delavan Lake.

The project was predicted to reduce phosphorus input to the lake by 3.5 pounds per year, but compared to the roughly 3,340 pounds it receives annually, this isn’t a substantial reduction.

“I think it’s going to have its ups and downs, but the overall trend will be relatively level,” said Heidi Bunk, Water Resources Management Specialist for Walworth County. “The really important take-home message here is that you have to keep at it. Every project helps.”