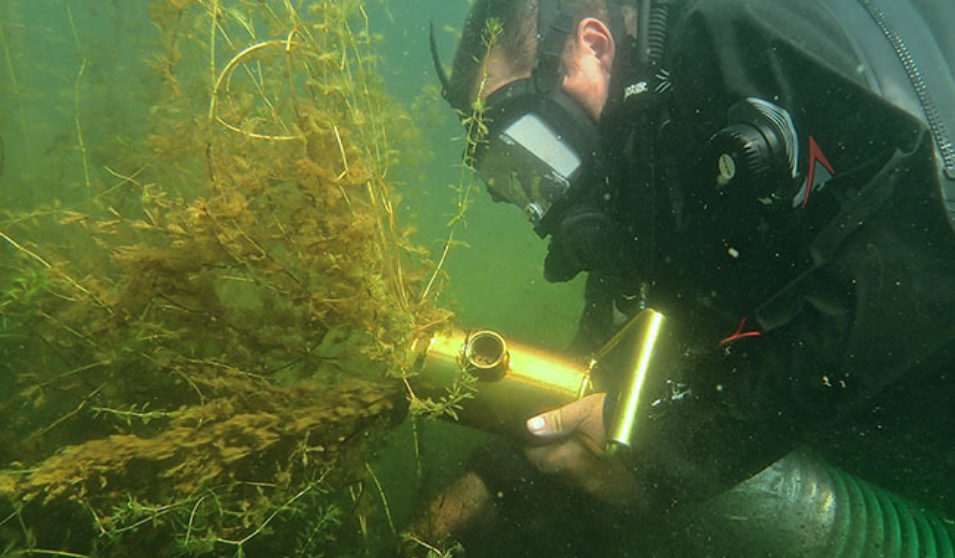 The time and effort it takes to remove invasive plant species can sometimes feel like running a marathon. But according to County Conservationist Greg Cleereman, Marinette County has been trying out a new method.

They are DASHing to get the job done.

DASH, or Diver Assisted Suction Harvesting, is a method of removing invasive aquatic plants with an underwater diver that vacuums the unwanted plants onto a nearby boat. After hearing about DASH, Chuck Druckrey, Marinette County’s Water Resource Specialist, decided to watch a machine in action.

“He looked at this unit that was used up in Lake Tomahawk that worked pretty decent, but he saw some things that he thought he could make better and then he just did it,” said Cleereman.

Druckrey began constructing the harvester and incorporated a pump that is traditionally used for underwater dredging of gold off the coast of Alaska. After a year of designing and building, the harvester system was out on the water.

Marinette County received a DNR grant three years ago to provide partial funding for the DASH, as well as chemical treatments of Eurasian Watermilfoil (EWM), an invasive aquatic plant.

So far the harvester has been used on Thunder Lake, Beecher Lake, and Little Newton Lake. “We’ve got it to the point in Little Newton Lake where we can’t find Milfoil anymore,” said Cleereman. The DASH method can also be used to remove other rooted aquatic plants, such as Curly-leaf Pondweed and Yellow Floating Heart.

While DASH has found success on these three lakes, Cleereman recognizes that it cannot be the only method of removing invasive species.

“By itself, if you are trying to rid an entire lake of EWM, it would be too labor intensive,” said Cleereman. “DASH should be used at initial infestations that are quite small or to follow up after treatments of herbicides.”

Using DASH in conjunction with herbicide treatments is both an effective and money saving solution. Herbicidal treatments can be expensive, ranging from $700 to $900 per acre, and they don’t eliminate every targeted plant. DASH is a good way to make sure all the remaining plants are found and removed.

As part of the requirements of the DNR grant, Druckery showcased the DASH system at a workshop in August to teach others how to build and operate a suction harvester system. Those attending were from other Land Conservation Departments, lake associations, and the DNR.

While the efforts to control invasive plant species continue in the coming years, Marinette County is planning to keep DASHing as long as possible—having this local capability is important.

“It isn’t necessary to wait until a grant can be successfully applied for,” said Cleereman. “New water bodies continue to be infested. With the DASH we can go into action immediately if the size and density of the plant bed is appropriate.”