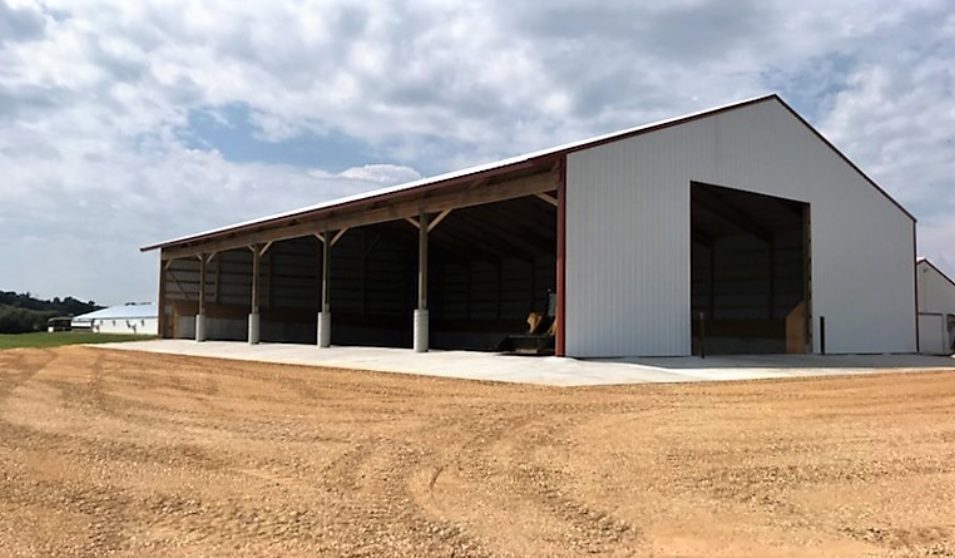 In 2016, local chicken farmer Nick Gamroth reached out to Trempealeau County Department of Land Management (DLM) with a problem. At the time, he was currently operating one chicken barn, with another chicken barn being planned for construction shortly. With having lack of cropland to spread manure and having to rely on other farmers to take his manure as the barn was cleaned out, he faced a problem – what to do with two barns worth of chicken litter.

Gamroth knew he wanted a safe, confined area to store his chicken litter so he didn’t have the constant worry of how long it was going to be stacked outside his barns. At the time, the barns were cleaned out every five weeks, so he was facing constant manure challenges. Gamroth didn’t want to have the chicken litter stacked outside of his barns for a long period of time until he could get another farmer to come pick it up.

With the barns being in close proximity to a class III trout stream, not only was he concerned about direct runoff from the litter stacks, but also seepage into the groundwater. By stacking chicken litter outside of the two barns for a long period of time, Gamroth would be out of compliance with both Trempealeau County’s Manure Storage and Management and Wisconsin DNR’s NR151 - Runoff Management standards.

Trempealeau County DLM worked with Garmoth and helped him apply for a Targeted Runoff Management (TRM) Grant through the DNR. Obvious that there were runoff concerns, a TRM grant made the most financial sense. Nick was awarded the grant in 2016 for a waste storage facility (NRCS 313) and heavy use area protection (NRCS 561), with the construction period beginning 2017-2018.

At first, the best option seemed to be to have four separate manure storage structures, one at each end of each barn. As the planning process went on and the Gamroth’s did more research, it seemed the best type of facility would instead be one large, confined and roofed waste storage structure to store all of the litter. 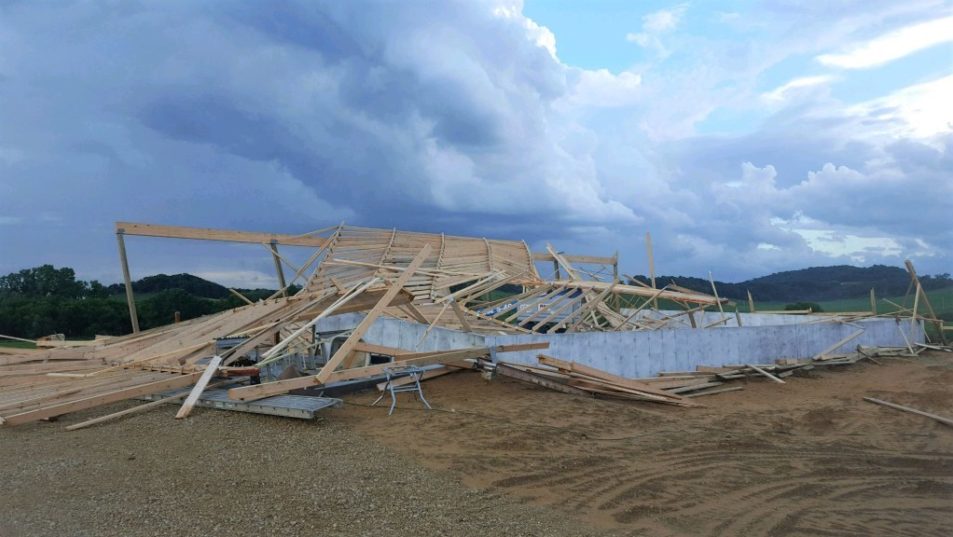 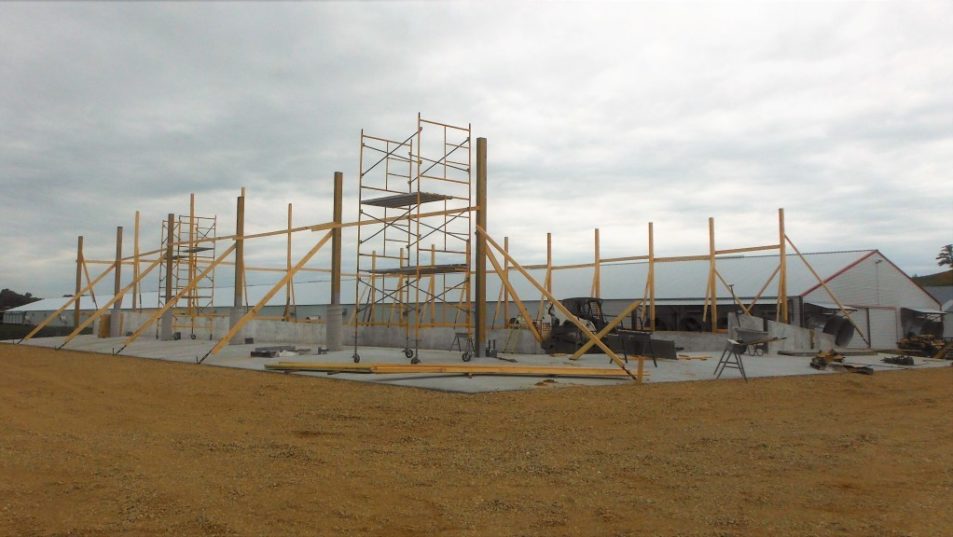 Although the Gamroth’s were interested in having a roofed waste storage facility, the requirements to meet the NRCS Roofs & Covers standard increased the price of the overall project so significantly, it no longer became an affordable option. The roof portion of the project could not be funded under the TRM grant because it wasn’t originally included in the application.

In order to include the roof structure to the grant, the grant would have to have been amended by Department of Land Management and then approved by Wisconsin DNR. It was decided that due to the costs to meet NRCS Roofs and Covers standard and amending the grant, it would be better option for the Gamroth’s to pay for a roof structure that isn’t as strict as NRCS Standard 367, and fund it on their own.

With collaboration between Trempealeau County DLM and DATCP, a design was drafted for a waste storage facility and heavy use area protection, meeting NRCS standards 313 and 561. Although it was understood that the Gamroth’s were going to roof the facility, it was designed as if a roof would not be constructed over the facility in order to meet standards. As a result, the concrete facility was designed with a slope to handle a 25-year, 24-hour rain event.

The original plan was to have the structure completed by early June, as the operation would have two flocks leaving the site and Gamroth would have litter to put into his new facility. The pad for the concrete facility was prepped in the fall of 2017, so that it could sit over the winter and continue to be compacted. It was then compacted again in the spring before the concrete was poured.

That spring, after the posts and purlins were put up, two strong, windy thunderstorms hit the farm in the same week and completely blew down the partially constructed roof structure. Unfortunately, due to the schedule of the contractor and processing with the insurance companies, the roof structure was finished until early August 2018.

Although it took extra time and the projects took a few twists and turns, the Gamroth’s are pleased with their new structure and are hopeful that other chicken farmers would be interested in the same type of project to prevent continuous chicken litter stacking and direct runoff. This is the first waste storage facility of its kind in Trempealeau County that was cost-shared and constructed through the Department of Land Management. 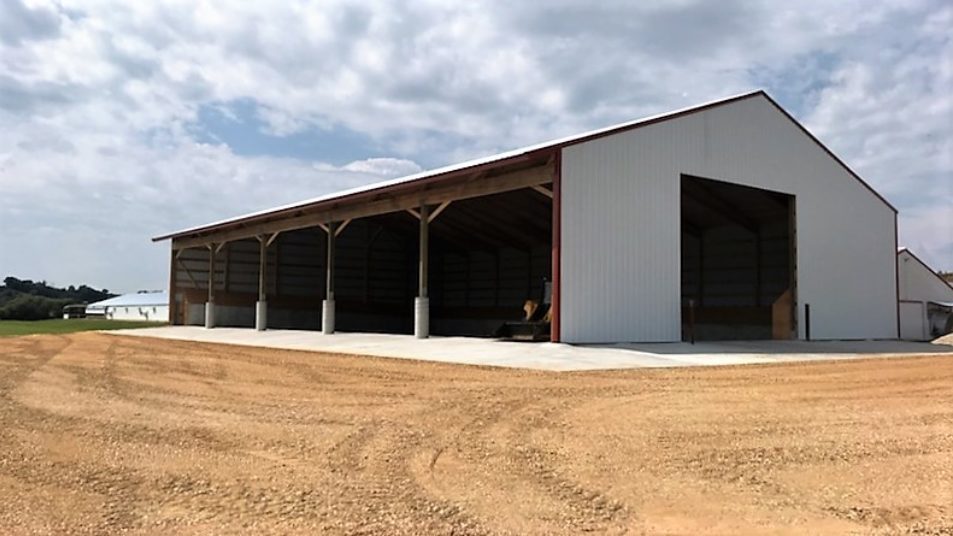