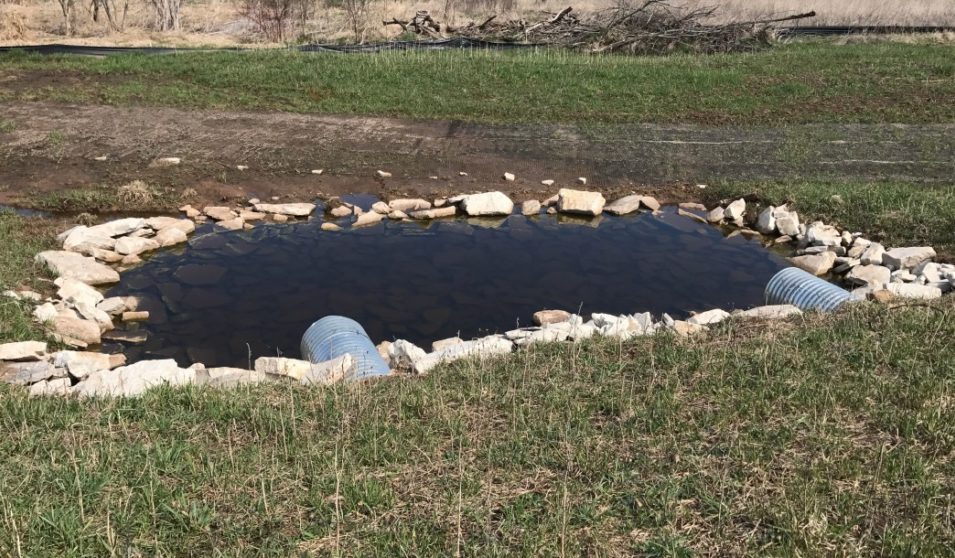 In May 2014, a dairy farm in Fond du Lac had a manure spill while draining a lagoon. The DNR was notified promptly, but 50,000 gallons managed to pour out. Nearly a quarter of that waste made it into neighboring Pipe Creek, which drains into Lake Winnebago.

Post-spill, the Fond du Lac County Land and Water Conservation Department (LWCD) decided it was time to install preventative measures. The incident was unfortunate, but it became a catalyst for conservation projects in the watershed.

After visiting the site in response to the spill, Ryan Rice, a Conservation Engineering Specialist for Fond Du Lac County LWCD, realized that it would be a great spot for a water and sediment control basin (WASCOB).

They started with a rock-lined waterway to stabilize the outlet and put in a grassed waterway in 2015. The following spring, they installed the WASCOB.

“It was quite a feat to get that thing built,” said Rice. “It took us a long time to get to the point where we could talk about construction. The location made it challenging because it gets very close to an easement, but once we were able to get through that, the cost-sharing part came together.”

The WASCOB has two large knife valves, which could be shut in the case of another spill. It also slows water down and prevents flooding for lakeshore homeowners, which is a constant issue due to the topography of the watershed. The change in elevation from the lake homes to the farms uphill is significant, despite their close proximity to one another.

Rice noted that the engineering staff at DATCP was essential to the completion of the WASCOB. Whenever Rice called Drew Zelle, a DATCP technician in Appleton, he was there.

County staff members were aware of erosion issues and they’d spoken to landowners and homeowners about water quality. There’s a harbor and county park at the mouth of Pipe Creek, and during rain events, the erosion can be very eye-catching, said Paul Tollard, County Conservationist in Fond du Lac County. During these events, sediment is visible not only in the creek, but also out into Lake Winnebago.

Tollard believes it will take a combination of hard practices and cropping practices to successfully mitigate runoff and erosion in the watershed.

“We’re working out much farther into the watershed than what the homeowners like, but that’s because once it gets to the homes, there’s not much we can do,” said Tollard. “We’re choosing to look at it from the water quality standpoint, so if we can do practices that will minimize erosion and allow more infiltration, hopefully that will impact the amount of flooding that homeowners are experiencing.”

“There is a lot of skepticism [about conservation practices] in the farming community, but we want them to come out and look at our land, so they can see that these practices are doing what they’re supposed to do,” said Tasch.

At the beginning, most of the money the county had was for structural practices. In search of funding for cropping practices, they applied for a grant through the Great Lakes Commision (GLC). They were awarded that grant in 2016, and have been working on implementing those practices since.

The grant from GLC lays out a phased approach. The county is still in phase one, which asks producers in the watershed to confirm that their nutrient management plan information is accurate. Throughout this plan, they’re looking for opportunities to reduce erosion and phosphorus runoff. It’s up to the landowners to step up and install those practices, said Tollard.

Phase two starts to discuss cost-sharing and funding. It will be a combination of state and county cost-share dollars, the GLC grant and any other funding the project can receive from NRCS’ Environmental Quality Incentives Program (EQIP).

“A large majority of land in the watershed is already signed up for phase one. It’s encouraging that as we move through this process, we have good participation from the landowners and producers,” said Tollard. “We’ll approach phase two once we get to that point.”

Rice and Tollard believe the scale of the watershed has allowed them to make real progress. It’s on the smaller side, and most of the land is owned by just a few people. The county LWCD has its plate full right now, and in a larger watershed where it took more staffers to contact landowners, the project would likely be more difficult.

The GLC grant has allowed them to move forward with harvestable buffers, which they have planned for implementation this year. The Fond du Lac LWCD has additional waterways and WASCOB projects in the planning stage, and it’s looking like it will be a busy summer for county conservation.

“We’ve done some great projects already and are planning as much as we can to do more in the project area,” said Tollard. “We hope to keep the momentum going.”